unfortunately the project and campaign has been put on the back burner due to work commitments,  but we have managed to finish the next part of the campaign all be it a little late. This fictional  battle took place when the 5th British infantry division with cavalry support from the Netherlands cavalry Division, were ordered to hold the Quatre Bras to Montreal St Jean road against the leading elements of Reille 2nd corps. ( in our campaign the battle of Quatre Bras never took place the French main attack against the Prussians did happen all be it a little further south of Ligny. This was a French victory and they drove the Prussians north isolating the Allies to the west ) The main defencive line of the Allies was now along the ridge with the village of Caillou on the British right. Wellington needed time to withdraw to his favoured defencive position at Waterloo, but to do this he needed time. The French under Reille were  advancing down the main road with elements of their cavalry covering the flanks. 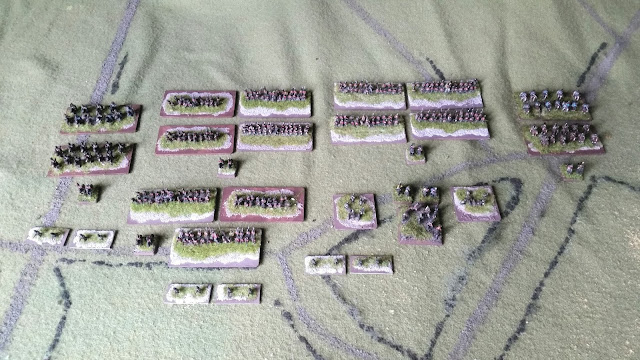 The allies force with command and attached artillery.

The full French force plus command

The rules we are going to use are called Napoleon at war. They are designed for large scale battles. You can customise the army's while still using the same bases. The base can represents a battalion in a corps action or a brigade in a large combined, corps action. The (AR) after each of the brigade commanders is there activation rate in the command phase of a turn. Each player rolls as many D6 dice as he has Brigade commanders, plus 1 D6 for the Command. More on command in the battle report.

FRENCH
the French orders are simply to clear the allies from the village and hills to the north of the main line of the Armies advance, as soon as possible. If at the end of the 10th turn the allies still hold the ridge line and village, you must withdraw from the combat.      ( you can explain this to Napoleon )
If the Allies only hold one of the positions they will be forced to withdraw from the combat, you can claim victory.

OPENING MOVES
The British and  Hanoverian infantry move onto the ridge. The 28th and the 32nd British line move to the right and move into the village. The 95th rifles move down the ridge to cover the main road leading to Caillou and the woods to its left flank. The remaining British infantry hold the centre with the Hanoverian infantry positioned on the left. The 2 batteries of artillery are posted near the centre. The 2 Brigades of Netherlands cavalry are in support on the left and centre.

The French begin there advance down the main road leading to Caillou  the 6th Infantry Divisions 1st brigade leading the infantry with the cavalry Brigades on both flanks. The rest of there command is strung out on the road.
We are going to leave it there a full battle report in will follow in part two.