With the news of General Loison battered force making it back to the fortress of Almeida on the 1st of July after his attempt to crush the rebellion around Porto. It was know clear to Juont that the north of the country was finally lost for the moment. All around Portugal towns and city's were rising up against the French, around the same time as Loison was fighting, the towns of Vila Vizosa and Beja to name but two also rebelled, although most of these uprisings were put down, it was a worrying development for the French. On the 27th of June the coastal fortress of Santa Catarina was captured by the students of the near by Coimbra university lead by Bernardo Zagalo, after the French garrison hand been surrounded and almost starved out. This small fort was to have big repercussions, as it made the landing of the British army on the 1st August possible. Elsewhere the French marched on Alcobaza and Leiria taking both towns after stubborn resistance from local forces, but the situation was less than stable for the French. General Junot back in Lisbon decided to regroup his men around the city. he ordered all possible troops to march on Lisbon and to leave men in the fortress of Almeida, Elvas and Peniche on the coast. French troops were on the move again, marching in the direction of Lisbon, leaving a trail of devastation in their wake, burning and plundering their way back to Lisbon. By mid July most of the troops had gathered around the area of Lisbon, and it was around this time that Junot received more bad news, as British transport ships had been seen along the coast, and rumours were abound of British troops landing. Unbeknown to Junot on the 19th of July general Dupont hand been beaten at the battle of Bailen, and forced to surrender on the 23rd nearly 18'000 French troops had laid down their arms never since the Revolutionary wars, had a French army been beaten on the battle field.

Now that the possibility of the British were getting involved, together with having to face  increasing numbers of Portuguese troops, Junot know looked to the east, and his lines of retreat, if things went wrong he didn't want to be trapped in Portugal. Junot's  best route out of Portugal was the road to the fortress of Elvas but this was straddled by the town of Evora. With its contingent of Spanish and Portuguese regular troops it might prove a problem, so Junot once again sent General Loison with around 7'000 men to take the town of Evora and open the line of retreat to Spain.
In Evora Major General Francisco De Paula Leite an ex naval officer was in command of a mixed force of Portuguese and Spanish regulars and militiamen, he had some cavalry and artillery with him as well as large numbers of poorly armed peasants and townsman.

The next battle of my peninsular project will be to re fight the battle of Evora. 29th July 1808.

The French
General Loison force was again made up of veterans, and had both line and light infantry as well as Dragoons and artillery in support. 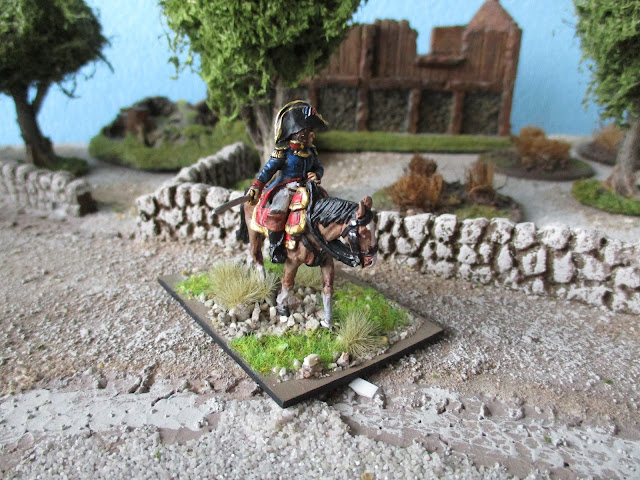 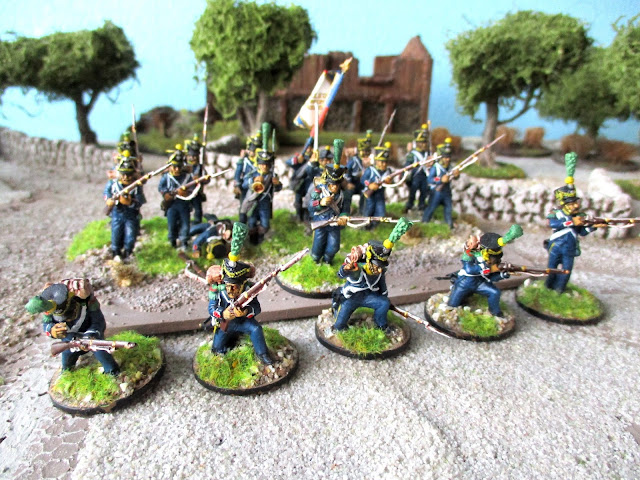 The 12th light with their skirmishers 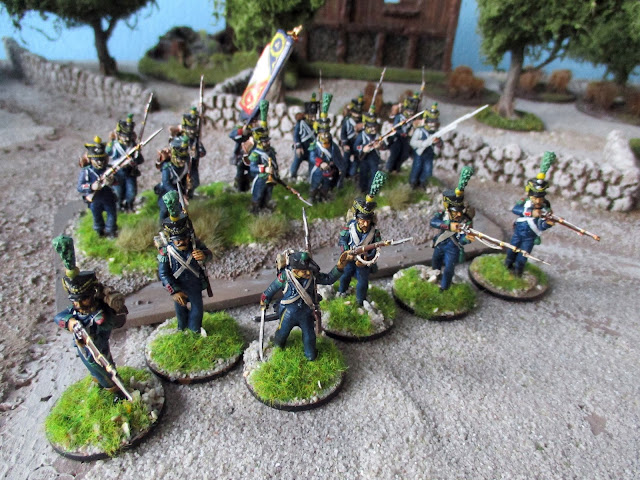 The 14th light with their skirmishers 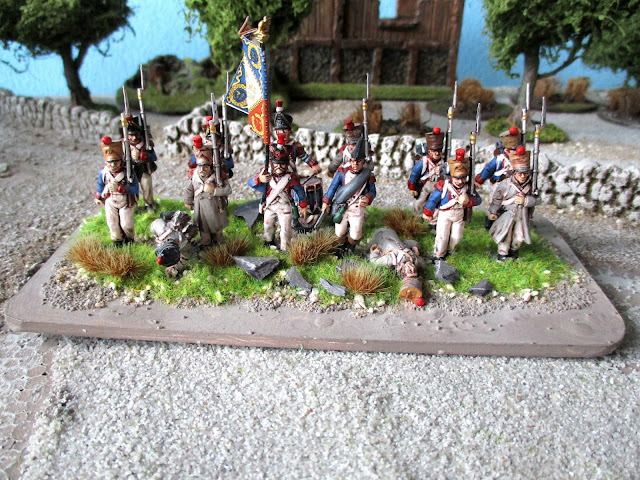 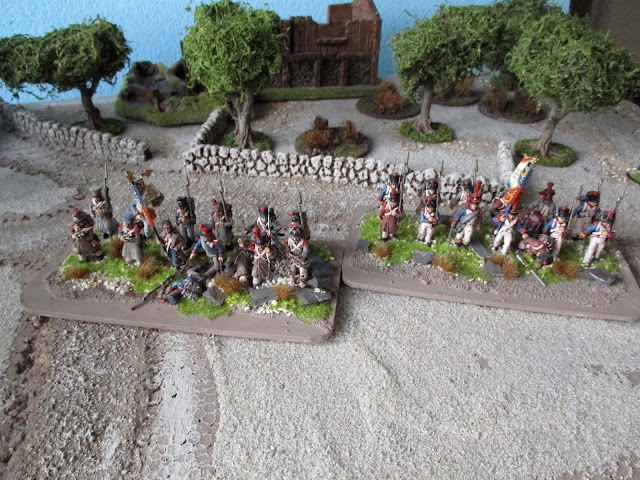 The two battalions of the 86th

The Hanoverian uniform were French in the style, but with a red coat for these i used Warlord games early French infantry they come with the long coats and the knee gaiters. as worn by the Hanoverian. 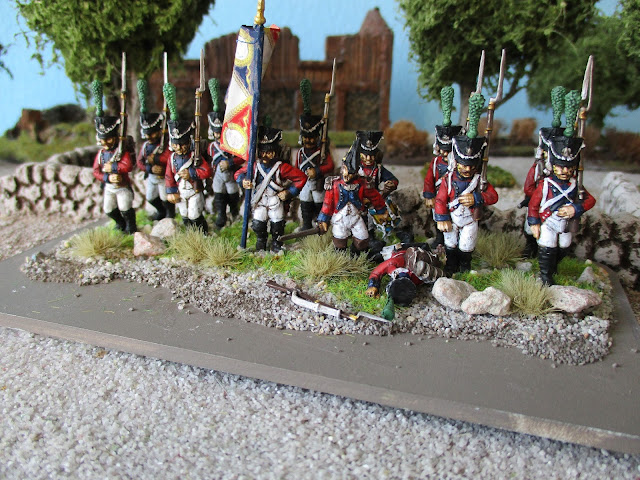 For the reserve Grenadiers i used a mix of Warlord games, Victrix and Perry miniatures. Technical i don't think the two battalions would have had carried eagles, but i couldn't help myself, and this dose mean i can use them for other French units in later games. 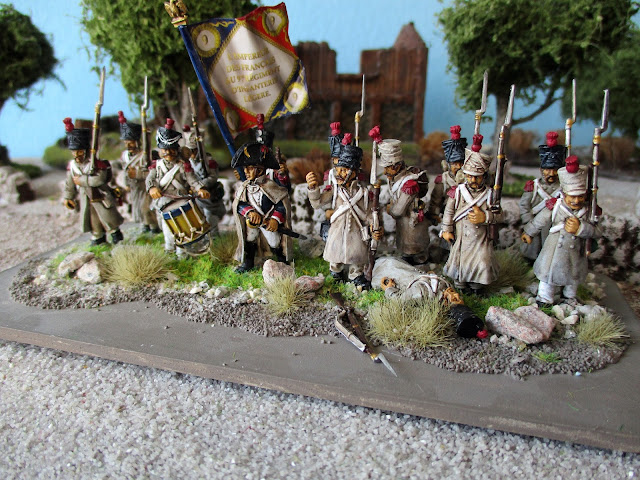 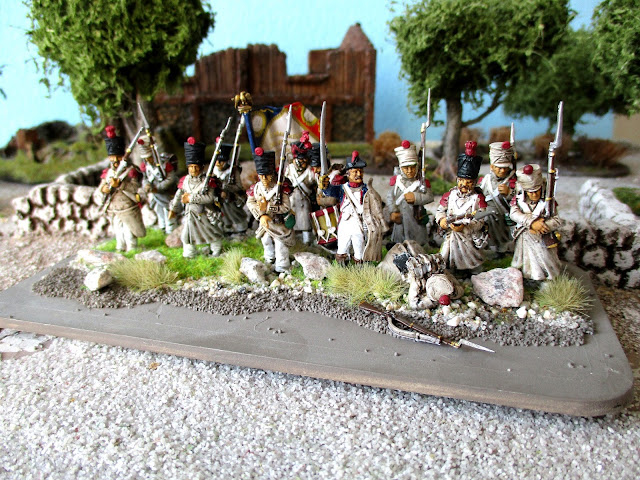 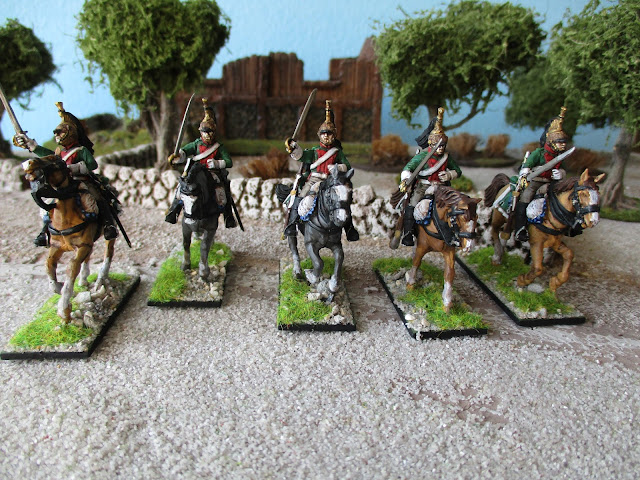 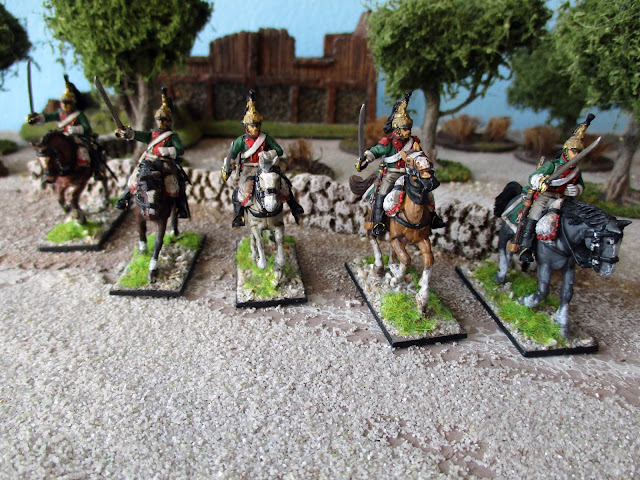 The 5th dragoons again with 5 single figures
Again I used Perry plastic dragoons box set For the 4th dragoons. I am also going to use one base to represent the French artillery. 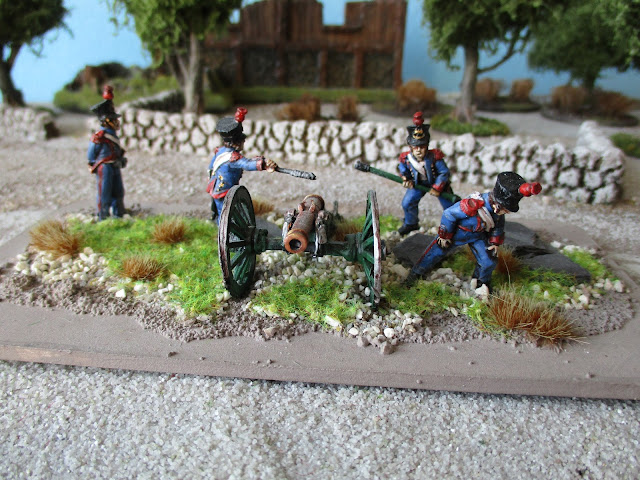 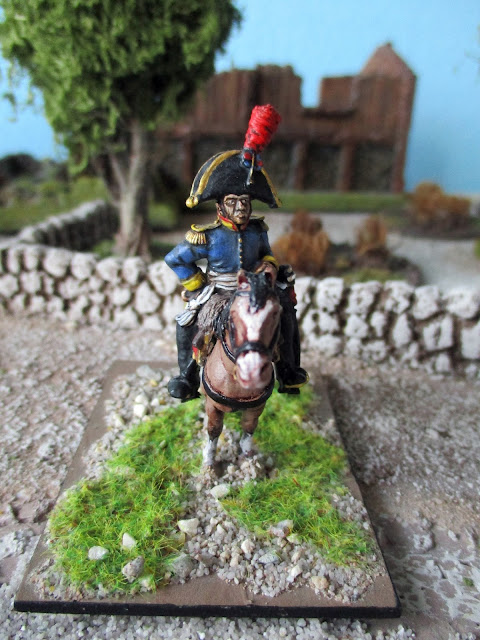 For the Portuguese regulars i have used the same battalion from the retreat from Texira battle, again I'm going to give them a full battalion, but no skirmishers. 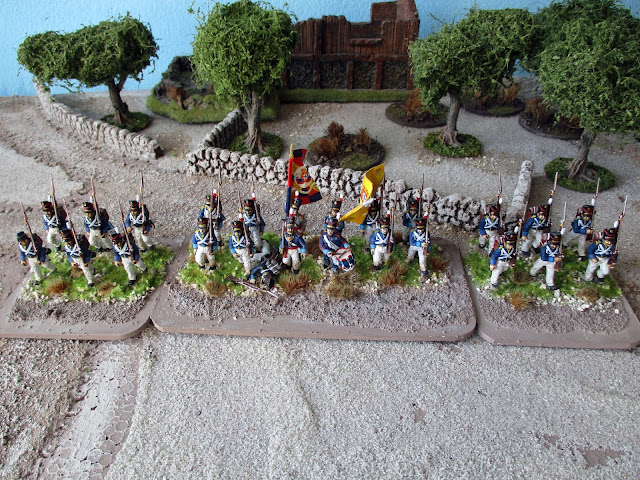 To represent the 3rd Portuguese artillery I'm going to use the artillery base from the earlier game. 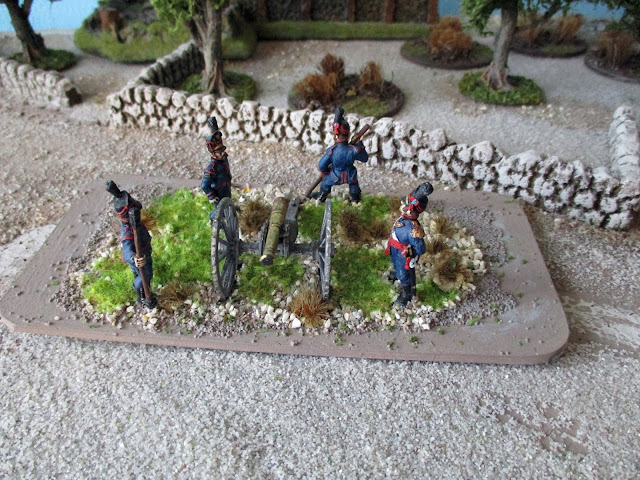 For the Portuguese volunteer cavalry i have found an illustration depicting the Lisbon police who were originally attached to French troops, but most absconded. so i thought i paint some up to represent the volunteers. i used a mix of Warlord games chasseurs  and Perry carabiniers helmets. 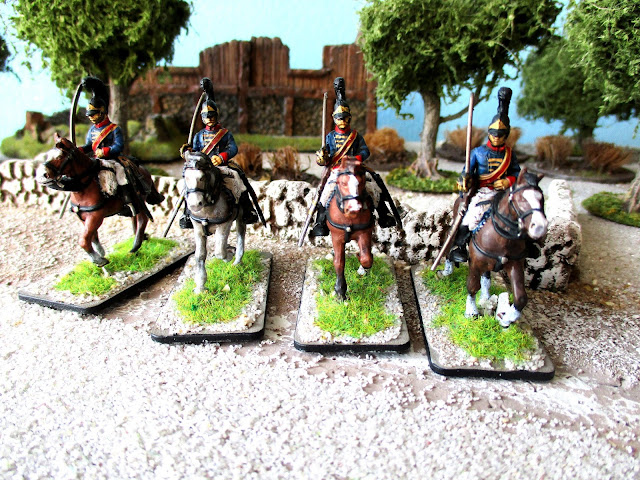 For the Spanish regular infantry i have used eagle miniatures Spanish infantry. I have gone for the distinctive Spanish white uniforms with red collars cuffs. 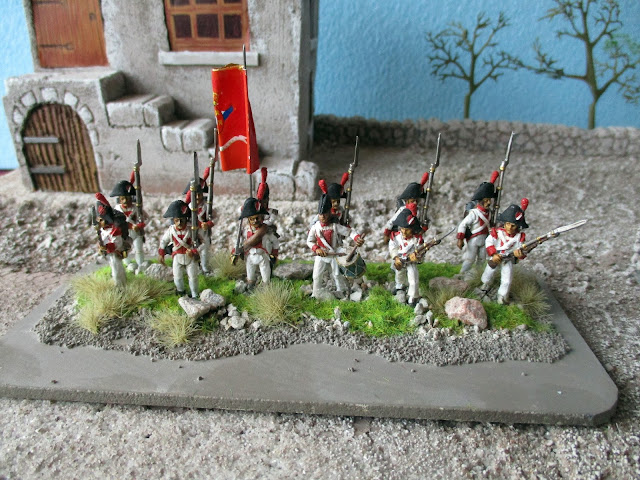 To represent the Spanish hussars i used Perry miniatures hussars box set. The Maria Luisa regiment wore the mirliton cap with sky blue pelisse and britches, the illustration i found shows them not wearing the red dolman  or outer jacket so i painted mine up without theirs. 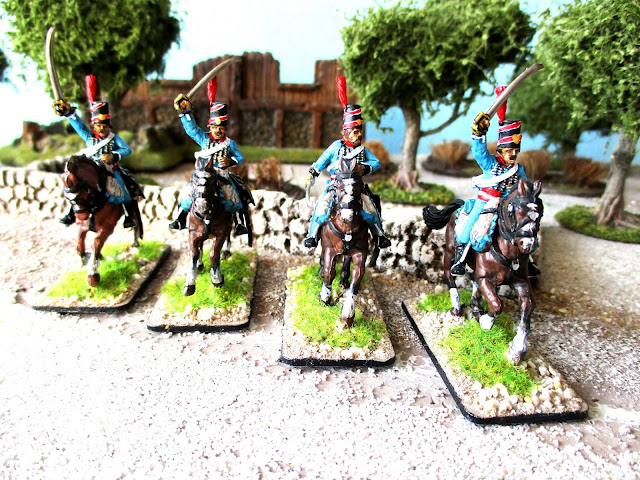 The Maria Luisa hussars in their dashing uniform

For the Spanish artillery i have used Eagle miniatures Spanish gun crew. 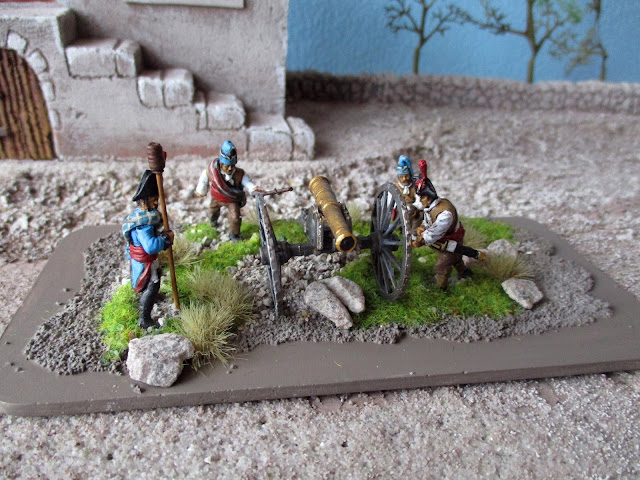 The militia and the irregulars making up the numbers.

The historical battle for Evora
Historically the battle didn't go well for the allies, much to the surprise of the French they were drawn up out side the town gates. The assault on the allies was lead by the 58th line, who broke the Portuguese and Spanish line. The Maria Luisa hussars road off in panic before they were contacted. The Spanish line regiment put up a stubborn fight and retreated well, with most of the Spanish withdrew to Olivenza, the rest ran for Evora, the town fell to the second assault, the first being held, the fighting soon spread into the town.
The town was sacked by the French and the slaughter was terrible. near by towns submitted rather than suffer the fate of poor Evora, but after the shock came the determination of the people to fight the French and drive them from Portugal.

Set up
For my replay I'm going to give the allies a better defensive position and allow them to retreat to a second position. I'm also going to handicap the French by having them arrive onto the battle field in drips and drabs.

To make things a bit more interesting and less one sided for my re fight, the allies will be defending a ridge line and their flank will be covered by a wooded area and a ridge. The second position is more open with some light woods on one flank and a few building and walls and fields on the other. Loison will approach from the west along the road leading to Evora, with him will be the Hanoverians and the 58th line and the 4th dragoons this is all the troops he has at his disposal at the start of the game. This will make things a little difficult for the French at the start of the battle, as the army is strung out on the road behind the vanguard i will roll a D6 for each of the other units to see when they will appear. 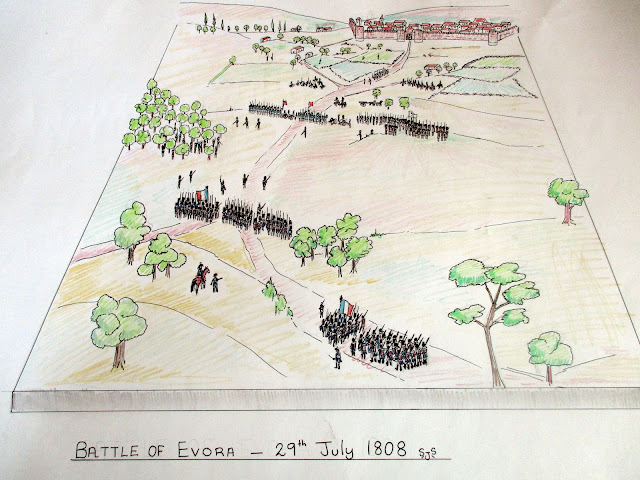 The battle sketch. Evora can be seen in the back ground. The first of Loisons troops are taking their position others are just appearing on the road. The allies can be seen ready to give battle in their first defensive position.

Well that's if for know the full set up and the battle report to follow in part 6 till then my friends.

Posted by Stephen Smith at 07:47 No comments: